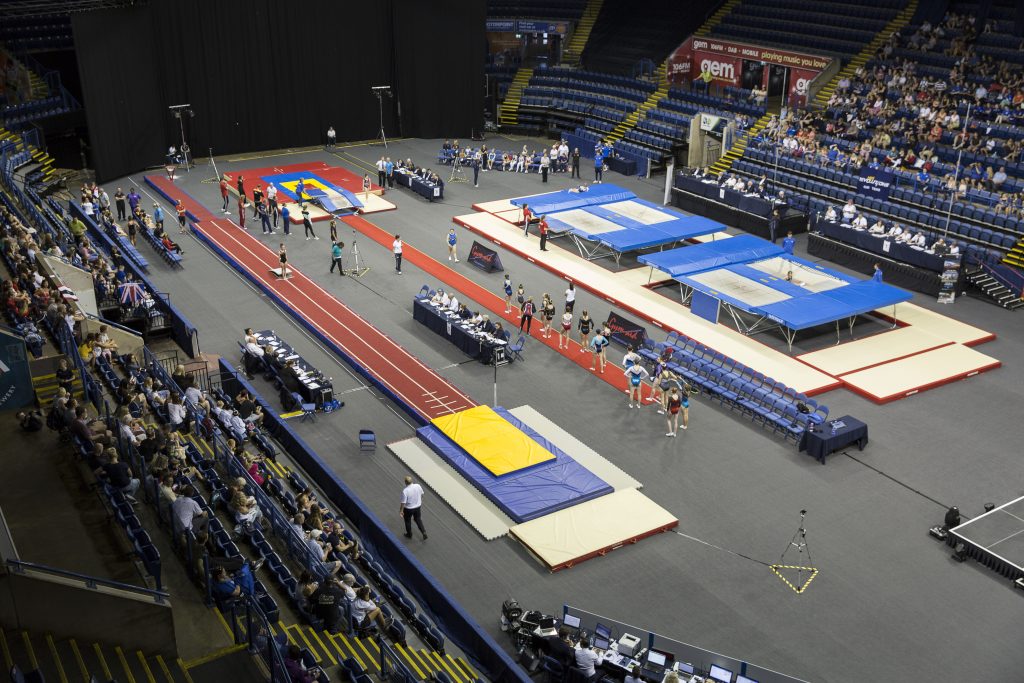 Thousands descended upon the great city of Nottingham in the summer of 2018 to compete in and cheer for their favourite gymnasts during the prestigious Trampoline and Tumbling National Development Finals, brought to the city by British Gymnastics.

The event, hosted by Motorpoint Arena Nottingham, took place on Saturday 7th and Sunday 8th July 2018 and gathered over 2,000 spectators.

Building on Nottingham’s fantastic sporting history – home to world’s oldest football league club, Notts County, one of the best cricket grounds in England, which will host five matches of the 2019 ICC Cricket World Cup and holding the title of England’s Home of Sport 2015 – it’s no surprise that world class sporting associations are attracted to Nottingham as a place to hold their next events.

During the Trampoline and Tumbling National Development Finals – a jam-packed, two-day sporting event – both enthusiasts and fans alike witnessed jaw-dropping routines from the most talented young gymnasts in Britain, as they wowed the crowds with exhilarating skills on the trampoline, breath-taking twisting somersaults on the tumble track, and precise and high-flying stunts on the double-mini trampoline.

Motorpoint Arena Nottingham proved to be a perfect host venue for the championships, with its main arena fitting the equipment and athletes comfortably on its specially designed floor, covering the ice underneath without any inconvenience to the competitors. The main arena is ideal for large events as it is an adaptable area which can be used for a variety of events: gala dinners for 1000 guests, product launches, exhibitions to conferences and sporting championships. It delivers the perfect setting from which to reach a large audience and can be themed and draped in a variety of ways, using a drape system to give that intimate feel and fully personalize your event. In the case of Trampoline and Tumbling National Development Finals, the athletes were competing in the middle of the main arena with spectator seats located around the arena for best viewing opportunity.

The event was so successful in fact that event organisers booked Motorpoint Arena for their 2019 event again. Trampoline and Tumbling National Development Finals is coming to Nottingham  between 12th and 14th July 2019.

If you’re looking to organise a sporting event in Nottingham please get in touch with out team to find out how we can help you with a host of free event services.