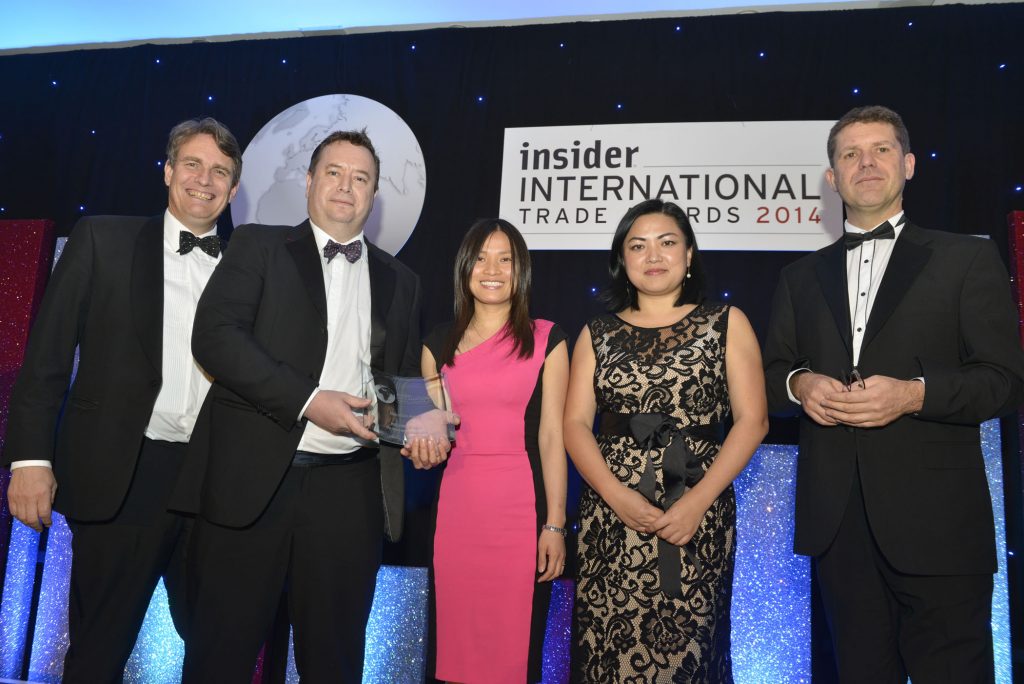 The University of Nottingham has won a prestigious International Trade award in recognition of the contribution it is making to UK exports and building international links.

The University won the ‘Education Award’ at the Insider International Trade Awards held in Birmingham, for demonstrating ‘a clear strategy, international sales, and how a regional centre of education can be transformed into a global player’.

Nottingham established an overseas campus in Malaysia in 2000 and also became the first western university to set up a campus in China, in Ningbo in 2004. The University now has close to 10,000 students in total on these two overseas campuses.

Nottingham has developed very strong links with businesses and government in China and Malaysia, which has led to a number of significant research projects. In Malaysia, the University is co-hosting a $45m Crops for the Future Research Centre in partnership with the government of Malaysia.

In China, The University of Nottingham has established extensive partnerships. Through its Asia Business Centre, Nottingham has built relationships with some of China’s biggest companies, including aerospace giant, AVIC, railway company, China South Rolling Stock, the China Resources Pharmaceutical Group and car manufacturers FAW and Changan. In addition, the University has also enabled local SMEs to build links with China.

The University of Nottingham has recently embarked upon two of its most ambitious projects in China. Earlier this year it opened its new Guangdong-Nottingham Advanced Finance Institute, which will train senior managers from industry, commerce, financial institutes and government organisations, who based in and around the southern Chinese financial centres of Guangzou and Foshan.

In another development at their campus in Ningbo, the University is helping to boost China’s marine economy by signing a £25m agreement to create an International Academy for Marine Economy and Technology (IAMET). The IAMET is a purpose built state of the art facility which will foster collaborations with industry, and draw on the input of independent world-leading academic and industrial experts.

Speaking about the award, Professor Chris Rudd, Pro-Vice-Chancellor for External Engagement at The University of Nottingham, said:

We are delighted to have received this award. In addition to the ongoing growth of our international student numbers across our China, Malaysia and UK campuses, we have also worked hard over the years to build contacts with industry and local and national governments in Asia.

Because of the international experience that our students receive, they are amongst the most employable in the UK and, through the links we continue to make, particularly in China and Malaysia, we are opening up exciting new opportunities for midlands companies to do business with Asia.

For information about The University of Nottingham’s services for business, visit www.nottingham.ac.uk/servicesforbusiness