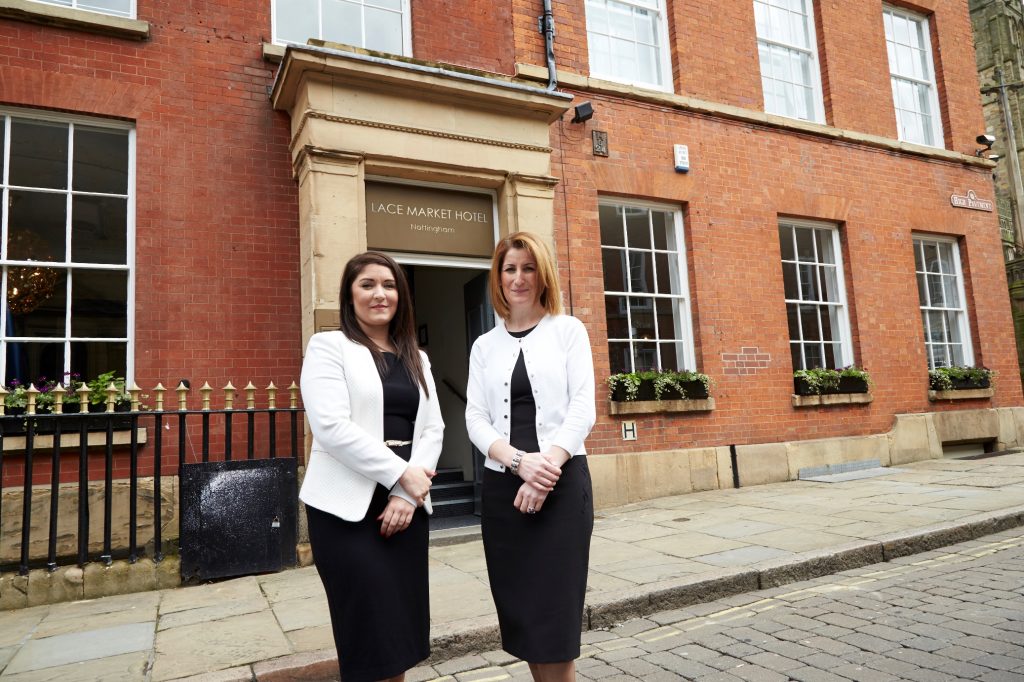 Originally from Portugal, Dulce Marques has over 18 years of experience in the hospitality industry, starting her career working in hotels in the Swiss Alps.  She then spent eight years at the boutique Cannizaro House Hotel in Wimbledon, before taking a lead role in the launch of Hotel Gotham in Manchester last year. Dulce has now relished the idea of a move to the East Midlands as Lace Market Hotel’s new General Manager. “I was thrilled to be offered the opportunity to manage such a stunning venue with endless charm. Every person I have spoken to in Nottingham is so affectionate towards the Lace Market, it’s an area that can only be looked after with love, care and respect for its history, and that is how I fully intend to treat the Hotel.

I want to make Lace Market Hotel the go-to place to stay in Nottingham. I have fallen in love with the city and the Georgian grandeur of the Hotel’s building is truly the jewel in the area’s crown. I’m excited to begin this new chapter and realise the hotel’s full potential with the help of a great team.

Also new to the hotel team is Sales Manager, Amy Derrick. The stunning surroundings of the Nottingham’s Creative Quarter are not unfamiliar to Nottingham-born Amy, who had worked for four years as Events Manager for Lace Market Hotel’s sister venues in Derby and Castle Donington, earlier in her career.

I have always loved the unique blend of history and sophisticated, contemporary styling at the Lace Market Hotel. It was only when I visited Merchants restaurant for Afternoon Tea recently that I heard of the sales role and jumped at the chance. There is a high level of ownership from everyone in the team and a real sense of pride in delivering the best possible service – I was really eager to be part of that. It’s my ambition is to make the hotel even more successful and use each aspect to its full potential following such a triumphant re-opening. We want Lace Market Hotel to support Nottingham in its position as an internationally renowned destination and I’m looking forward to see what the future holds.

Both Dulce and Amy have hit the ground running since starting in their new roles and are part of the hotel’s expanding team of hospitality professionals appointed since the hotel’s reopening in October 2015.

Great to see the new branding which brings together all of the University of Nottingham’s outstanding conference, hotel, and event spaces within our city! https://t.co/D48mWbiSk8

We had a very productive day @CHS_Group Show in Leeds today including meetings with potential clients and some more familiar faces! @nottsvenues https://t.co/LN0lquBx4p

We’re @CHS_Group Show in Leeds today connecting with event organisers, associations and partners from across the country and telling them all about #Nottinghsm’s conference and events offer!

Nottingham’s Albert Hall is an exceptional conference facility, that’s played host to a variety of successful events, within the heart of the city.

Its permanent professional in-house team of staff sets this venue apart by delivering a personable and high-quality service. https://t.co/i6fQSkOr8H

Check out some of the incredible events taking place across the city in the upcoming months!

With a diverse range of events throughout the year, it’s the perfect place to socialise after-hours. https://t.co/CquY8BH3Kg

The team at St Mary’s fantastic work led to a brilliant evening that shined a spotlight on fashion designers of the future⭐️. https://t.co/DdlJKuuuLk

After a £20 million makeover, NTU’s Clifton campus has contemporary and flexible meeting spaces that can accommodate up to 950 delegates.

As well as boasting start-of-the-art interiors, the campus prides itself on its high sustainability. 🌿 https://t.co/zP0LpumrYI

Set within beautiful grounds, Trent College can cater to a variety of events🤝

They offer a wide range of state-of-the-art facilities such as an event space for up to 800 delegates, Astro-turf pitches, playing fields, a sports hall, swimming pool, classrooms and boarding halls. https://t.co/EXEQUZc4WF

We’d like to say a huge thank you to the team at the newly refurbished Hilton Nottingham for hosting our Team planning day.

The meeting room was wonderful and had absolutely everything we needed.

Special shout out to Denise!

Nottingham wants to ensure the safety and success of your event. COVID-19 policies are still in place for many of our venues and additional precautions can be re-introduced should you require it.

Host your next event within the city’s distinct centerpiece, the Council House, standing proudly before the Old Market Square💚.

Its impressive rooms can accommodate an array of events such as small corporate meetings or large functions such as wedding receptions. https://t.co/4zltkcxFQU

Are you looking for a fun and unique team-building activity?

Get your team together and make a splash at the Corporate Dragon Boat Race taking place at the National Watersports Centre this June! 🌊

Antenna is a versatile venue in the heart of Nottingham’s city centre and regularly hosts clients such as Speedo, Macildowie and NTU.

Its partner venue, Metronome, is an immersive space with world-class live events facilities, perfect for a digital conference or awards ceremony. https://t.co/lRdwJ3dDe9

Although COVID-19 restrictions are lifted, many of our venues still operate safety policies to ensure confidence when hosting face-to-face events.

These venues can also reintroduce policies should you require additional precautions 💚. https://t.co/Flw2Po6ZPz

Crown Plaza Nottingham is a stunning hotel offering stylish rooms, modern facilities, and a 600-space car park, all within the heart of the city

As well as being great value accommodation they are a leading Conference and Meetings venue, catering to up to 400 delegates. https://t.co/hWUq3S7dK0

Cosy Club, in the heart of the city, has retained the elegant and charming interior of the former Victoria Club casino to create a series of delightful private rooms for special occasions and events 🥂. https://t.co/hN80hRdCTa

This palatial historic home of Lord Byron offers elegant spaces for a range of events, seminars, and special occasions.

Its distinctive rooms, each steeped in history, will create a memorable setting for any event. https://t.co/DZYezJmNtC

A compact city centre and modern tram system means that visitors can get around easily, enjoying the vibrant shopping and social scene around their event in one of England’s leading cities for sports and culture. https://t.co/t4UxtvW1NW